Christopher Barth with adviser R. Pilawa-Podgurski
The design of high power density motors frequently results in a significant reduction in motor reactance, which reduces the machine current filtering. A multilevel inverter strategy with high effective switching frequency is used to generate filtered, sinusoidal currents in low-reactance machine windings. This project is developing high-density, multilevel inverters using GaN devices. Work has focused on flying capacitor multilevel (FCML) inverters. An exceptional power density (50 kW/kg, excluding the mass of heatsinks) has been obtained through the development of custom integrated switching cells, which both reduces unwanted parasitics and allows for a modular design approach.

Figure 21 shows first- and second-generation 2 kW prototype inverters. Due to the scaling effect of multilevel inverters, each switch in the design must be rated for only a fraction of the total bus voltage. This enables the switches to be smaller and faster, which in turn allows for the use of smaller passive components. 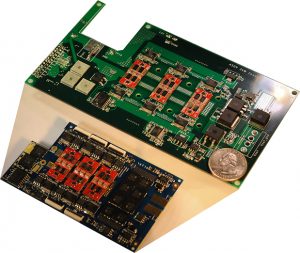 A 1 kV, 13-level FCML inverter, shown in Figure 22, has also been designed and fabricated to demonstrate the scalability of the multilevel approach. This research is funded by NASA and NSF.