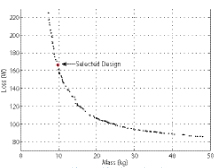 Over the past several years, Purdue has developed design tools for several electric machines, including wound-rotor synchronous machines (WRSMs) and asymmetrical reluctance machines (ARMs). The WRSM design tool has been applied to the electrical sub-system of a 2 kW man-portable power system (MPPS). In this application, the energy source is a diesel engine that has a governor to hold the rotor speed constant at 3600 rpm. The specified dc bus voltage is 200 V. The dc bus voltage is used to supply power to a singlephase 240/120 volt outlet using a single-phase inverter. In the MPPS application, the minimization of mass and loss are keys to improve portability and fuel efficiency. 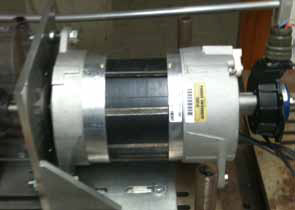 The machine has been tested to validate the design tools. The predicted performance matched well with the measured performance. 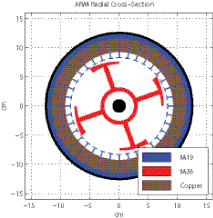 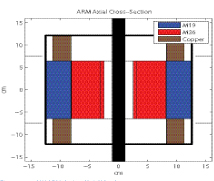 The other topic of this effort was the ARM in which the currents are actively controlled as a function of rotor position. The primary concept of the ARM is to shape the rotor pole face in such a way as to maintain nearly constant flux density acros the entire pole face over a region where the current density is high. An analytical model-based design code for the ARM has been developed and used to design a 3 kW machine, with a nominal rated speed of 3600 rpm. The resulting design is shown in Figures 11 and 12. This design approach has been validated via finite element analysis (FEA) using Ansoft’s Maxwell 12 software package. The torque and flux density waveforms from the FEA study agreed reasonably well with the predictions of the design model.