High power density rotating machines are an important research thrust for applications such as offshore wind generation and turbo-electric aircraft propulsion. Although employing superconductors in electric machines can yield substantial increases in power and reductions in weight, many challenges remain, including the state of technology readiness, high risk, and increased cost. This research attempts to address those challenges with an actively shielded, air-core topology employing low-cost Nb3Sn superconducting field windings. The electromagnetics were optimized using an evolutionary algorithm, and one design was chosen for a bench test. 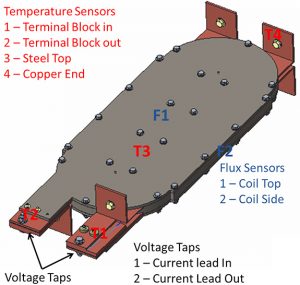 Recent efforts have focused on demonstrating one of these superconducting field windings with hardware. A winding design was formulated in collaboration with Hyper Tech Research, a manufacturer of superconducting wires and magnets. The magnet was designed to minimize heat load from current leads, contain strain within the superconducting strands, and allow thermal margin. Thermal and structural analyses have confirmed the desired performance characteristics. The coil includes temperature sensors, flux sensors, and voltage taps for validation purposes. A 3D rendering of the coil is shown in Figure 5, and the completed coil is shown in Figure 6. Tests are underway to validate expected performance at the Center for Magnetic

and Superconducting Materials at The Ohio State University. This research is supported by NASA.