Any collection of interconnected generators and loads capable of islanded operation is generally considered a microgrid. It follows, then, that there are no formal restrictions on generator type in a microgrid; however, like the prototypical example of a neighborhood comprising homes with rooftop-mounted photovoltaic arrays, microgrids are typically envisaged to consist entirely of generators interfaced through power electronics. Consequently, without the spinning mass inherent in traditional synchronous generators, this class of microgrid has little to no effective inertia, thus making frequency regulation one of the key operational challenges. In this work, we describe the implementation and testing of a centralized and a distributed frequency-regulation controller for islanded inertia-less ac microgrids. We use a simple six-node network, as shown in Figure 8, to describe the islanded inertia-less ac microgrid with three inverter-based generators as well as loads. 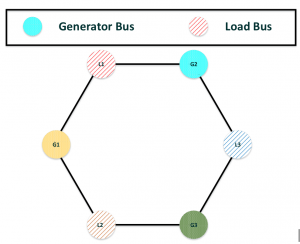 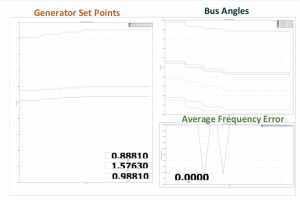