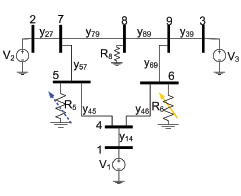 Power electronics are prevalent at all levels of power systems, including many loads and in renewable energy resources, such as photovoltaics and wind generation. This is both a curse and a blessing to the power system design engineer—a curse because power electronic loads can regulate energy intake so tightly that negative impedance instabilities and voltage collapse can result. They are a blessing, since by their nature the terminal characteristics can be controlled in both load and source to have desirable attributes and to manage local energy storage. In small power systems, such as vehicles and naval ships, power electronics are the dominant network interface element. Here it is advantageous to design the controls of the power electronics, as well as any other network element, to best utilize energy assets and avoid system collapse. 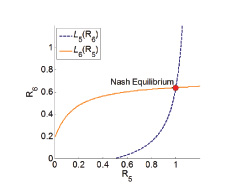 This work addresses the interactions of multiple power system entities using a game theoretic setting in which “players” have to dynamically negotiate to achieve their desired goals. The controls of the individual loads are based on a geometric energy control method with the determination of the manifold based on the desired interaction. For example, the small power system in Figure 42 has two controllable loads at buses 5 and 6. Each load will be influenced by and have an optimal reaction to the characteristics of the other depending on their objectives. Figure 43 shows the reaction curves for players 5 and 6 with the system Nash equilibrium point at the point of intersection. This principle is used to design the controls and terminal characteristics of the load and sources such that they will work together to enhance the stability of the overall system.