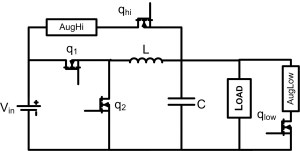 There are many applications where fast response to load changes in a dc-dc converter is important. Microprocessors, for instance, require tightly regulated low-voltage supplies to perform in the presence of load slews that can be hundreds of A/Î¼s. To overcome the limitations in typical voltage regulators, a large output capacitance is necessary to maintain a stiff voltage during load current steps. As the goal in regulated converters usually is to maintain fixed output voltage, the inductor current is the state that must change to meet the new load demand. Minimum-time or time-optimal control of converters has focused on determining the fastest response possible given a fixed converter topology. With minimum-time control, the response reaches the circuit physical limits but is still constrained by inductor slew rates and open-loop behavior. 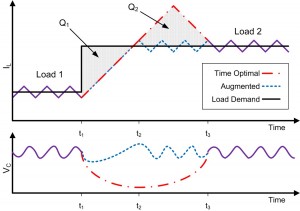 This research presents a systematic way to overcome slew rate limits and prevent significant output voltage deviation of a buck converter during load transients. A converter can be augmented with additional energy paths which supply or sink energy as shown in Figure 32. The augmented branches do not operate during steady-state operation and preserve normal converter operation. Proper time-domain operation choices of these branches can effectively null load transients. 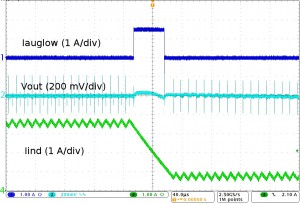