Catalyzing the electrification of mobile transportation platforms such as ships and aircraft will require volume and weight reductions in packaged electronics for computation, power delivery, and propulsion, because of the combination of the reduced surface area for extracting heat and the harsh environments inside these systems. The fundamentally low heat flux of classical, passive single-phase air or liquid cooling methods is insufficient for addressing these stringent thermal management requirements. Thus, an active, two-phase cooling solution is required to overcome this thermal obstacle and simultaneously facilitate increased computational density and power density.

This study demonstrates the first example of active phase-change cooling of wide-bandgap transistors immersed in a vapor chamber using electric-field-enhanced (EFE) jumping-droplet condensation, as shown in Figure 1. For this experiment, microscale water droplets (≈10 µm) coalesced and jumped from a cold copper oxide (CuO) nanostructured superhydrophobic surface toward an array of high-power gallium nitride (GaN) transistors acting as local hot spots (each device is 4.6 mm by 2.6 mm). The spacing between the hot and cold surfaces within the vapor chamber, as well as the orientation of the vapor chamber with respect to gravity, were carefully varied in order to highlight system parameters for optimizing this cooling technique. Since these droplets become positively charged when they jump from the cold surface, external electric fields were employed to guide the droplets dynamically toward the hottest GaN switch in the array. The power dissipation and magnitude of external electric field applied to each transistor in the circuit could be varied independently. The junction temperature of each GaN device was also carefully monitored using a real-time, on-state resistance measurement. Improved cooling performance would be manifested as increased power dissipation capability with maintained junction temperature. As shown in Table 1, the experimental results highlight the successful capacity to steer droplets and a dramatic four times improvement in heat flux while maintaining the same device package temperature using this EFE jumping droplets technique compared to a conventional cooling scheme. Using theory and experiments, we theorize that improvements in control of the condensation rate will enable improvements in heat flux dissipation from 10 W/cm2 to > 100 W/cm2. Our work both demonstrates EFE condensation-based electronics cooling and provides a framework for the development of active jumping-droplet based vapor chambers capable of spatial and temporal thermal dissipation control. 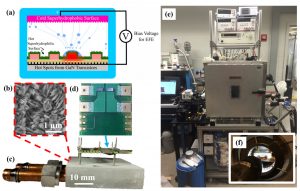 Figure 22: (a) Proposed experimental setup with hotspot enclosed within a vapor chamber for phase-change cooling. (b) the superhydrophobic coating on (c) a cold plate enables droplets to coalesce and to jump toward (d) the hot GaN transistors on the PCB. (e) A vacuum chamber with (f) view ports enables imaging of this liquid-vapor cooling process