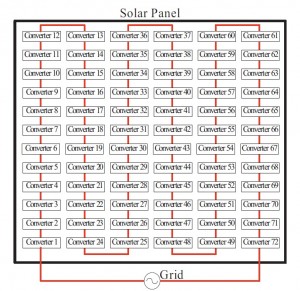 Photovoltaic system topologies have been moving away from large centralized systems towards low-power distributed systems. Recent interest has focused on developing a solar panel which directly interfaces to the ac grid without external dc wiring. This is referred to as a PVAC module. The developing approach to ac module design has been to interface each panel to the grid through a single dedicated inverter, known as a microinverter. Although microinverter systems optimize performance by tracking the panel maximum power point, mismatched power production among solar cells due to partial shading on a particular panel can severely degrade power output. It has been demonstrated that if a single cell on a 72-cell panel is shaded, the panel power output diminishes by more than 25%. This strong dependence of overall power output on solar cell conditions suggests that the power-electronic conversion process should occur at the level of individual solar cells.
In this work, decentralization is further explored within an ac module. The system to be considered, as shown in Figure 22, attempts to reach the individual cell level. To realize such a system, a control system for managing both system level and local converter energy while maximizing power output is being developed. A low distortion output current can be achieved with suitable interactive controls. Simulation results show low distortion output current on a cell level from an ac module comprised of 72 power converters within the module.

This research is supported by an NSF felllowship and the Grainger Center for Electric Machinery and Electromechanics.