Brett Robbins with advisor A. Domínguez-García 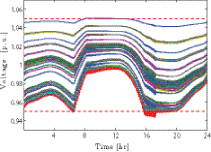 Distribution systems are subject to several emerging technologies that have the potential to provide ancillary services to the grid. These devices, DERs, include renewable resources, such as photovoltaic (PV) systems or wind turbines, as well as energy storage devices, such as plug-in hybrid electric vehicles (PHEVs) and MW batteries. Historically, distribution systems have been overdesigned and the uncertainty introduced into the electrical grid by the DERs has been considered negligible due to their small penetration in the energy market. However, as the number of DERs continues to increase, traditional approaches to the design and control of distribution networks will no longer be adequate. For example, a high penetration of PV installations has the potential to cause voltage rise and a reversal of active power flow, where the network has a net generation instead of load. 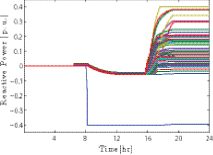 Although DERs are intended to produce active power, they can be utilized to provide reactive power support through the proper coordination and control of their power electronics grid interfaces. We propose a two-stage distributed control strategy that determines the necessary reactive power contributions from the DERs to maintain system operations within their desired specifications, i.e., bus voltages are required to be within ±5% of a nominal value. The first stage provides a local feedback control to correct bus voltages. The second stage sheds excess reactive power demand from nodes that have reached their capacity but require additional support.

Simulations have been performed on a 123 bus distribution system that is subject to a high penetration of PV installations and PHEVs. Figure 36 illustrates the two-stage control strategy’s ability to correct the voltage limit violations that occur from active power injections midday and increased loading in the evening. The reactive power contributions are shown in Figure 37.

This research is supported by PSERC project T-41: Implications of the Smart Grid Initiative on Distribution Engineering.