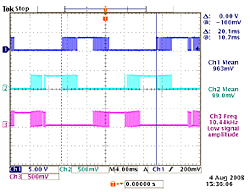 The goal of this research is to lay the groundwork for implementing nonlinear, large-signal digital control techniques implemented in the time domain using a field programmable gate array (FPGA). In summer 2008, research has been conducted on the digital control of matrix converters at Tsinghua University in Beijing, China. This collaborative project has focused on implementing a digital pulse width modulator (DPWM) method with an FPGA to control the rectification stage of a two-stage matrix converter. Figure 33 shows a DPWM signal along with control signals during an operation sector change. A sector change is a change in the conducting phases supplied to the matrix converter. There are six sectors during one period. So during a sector change in a three-phase system, the phase that is connected to the positive or the negative terminals would change.

If time permits, a DPWM technique with a new current commutation technique will be developed and implemented for improved performance.