Jason Galtieri with adviser P. Krein
Mismatch among photovoltaic (PV) cells accounts for a significant proportion of annual energy reduction in solar arrays. Sources of mismatch include cell degradation, poor factory binning, and non-uniform irradiance due to shading. Differential power processing (DPP) has the capability to mitigate all three of these sources by reducing the dependence between neighboring PV cells. Figure 31 shows power production in PV strings of varying length (N), under randomly distributed mismatch. 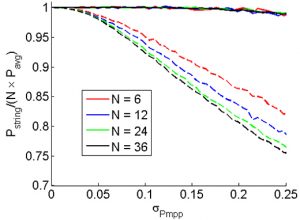 Another avenue of research is looking into the diagnostic capabilities of subpanel converters. Converters can track individual submodule performance and compare it with neighboring submodules. Users can then be alerted to consistently under-performing submodules, such as in the case of obstructed or atypically degraded cells. Additionally, converters allow IV sweep capabilities in the first and second quadrant. Variations, over time, in specific sections of the curve may be used to proactively take measures to avoid damaging the array. This research is supported by the Grainger Center for Electric Machinery and Electromechanics, the U.S. Army, and the Department of Energy ARPA-E program.