Mismatch among photovoltaic (PV) cells accounts for a significant proportion of annual energy reduction in solar arrays. Sources of mismatch include cell degradation, poor factory binning, and non-uniform irradiance due to shading. Differential power processing (DPP) has the capability to mitigate all three of these sources by reducing the dependence between neighboring PV cells. The focus of this research has been developing models for the various sources of loss in arrays, as well as DPP operation. With these models we can quantify the improvements DPP offers in annual energy production.

Previous results from self-shading simulations have shown DPP increases the energy harvest of rows experiencing self-shading effects over rows with only bypass diodes. Current work has investigated the trade-offs of converter power rating on annual energy harvest. Lower power ratings will correlate to more compact and less expensive converters. Past work has assumed converters can process the full PV module power (100% power rating). Figure 1 shows the minimum converter power rating needed to achieve less than one percent energy loss, compared to the 100% power rating case. Simulations are run for sites across the United States. We see for most locations across the United States that a power rating between 10-30% is adequate to mitigate self-shading effects. The inclusion of additional sources of mismatch, such as non-uniform degradation, and partial shading will increase this minimum power rating. However, we do not expect any mismatch scenario to require a 100% power rating in order to achieve satisfactory energy harvest. This research is supported by the US Department of Energy. 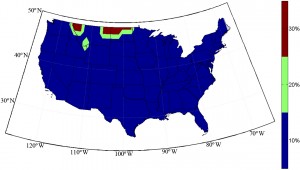