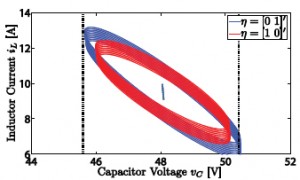 Figure 23: Set of Reachable States for a 12V to 48V Boost Converter Subject to Uncertainty on the Source- and Load-Side.

The operation of power electronics systems is subject to uncertainty. These uncertainties may be classified as either operational or structural.

Operational uncertainty is used to classify random changes in the load or supply of the converter. For example, the voltage supply may exhibit a ripple and the current demanded by the load may vary over time. Structural uncertainty is associated with changes to the physical structure of the system. For example, a random fault in a component in the converter may be regarded as a structural uncertainty. During the design stage of any power electronics system, it is necessary to carry out an extensive analysis to make sure the system behaves as expected for all possible operational conditions that arise due to operational uncertainty. Such analysis is usually conducted through extensive time-domain simulations of all possible inputs and faulted configurations that arise due to operational and structural uncertainty. This is a very painstaking and time-intensive process.

The proposed method for computing the set of reachable states applies an unknown-but-bounded uncertainty model to the operational uncertainties of the power electronics system. For example, the current demanded by the load may have a minimum and a maximum value. In this case, it may be assumed that the value of the current at any given time is bounded between these two extremes. The unknown-but-bounded uncertainty model has been successfully applied to compute the set of reachable states for converter topologies operating in both an open-loop and boundary-controlled configuration. Figure 23 shows the set of reachable states obtained for a boost converter. In the figure, the set of reachable states is the region contained within the region enclosed by the red and the blue ellipsoids. The output voltage regulation requirements are shown by the dotted black traces. In this case, the converter source voltage and load are subject to some unknown-but-bounded variability, but the converter design delivers the required performance in spite of the uncertainty in the system. The computation of the resulting set was completed in several minutes, whereas several hours were required for time-domain simulations to produce a similar but less complete result.

This work is supported by funding from the Draper Laboratory, Draper SC001-337.