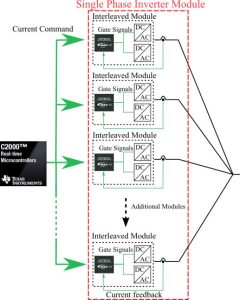 Inverter designs seek to minimize system volume and weight and improve efficiency and performance. As the energy density of capacitors has been shown to be around two orders of magnitude higher than inductors, one method of increasing power density is through the increased use of capacitors as the filtering components in inverter designs instead of inductors. Modular-multilevel and flying-capacitor inverters use a higher number of active switches and require advanced control strategies. In order to develop increased reliability, research is being done in the control of many parallel sub-inverters, which can be operated as shown in Figure 24 to partially meet system requirements, even in the event that a few of the submodules fail.
Additional research is being conducted on the performance of GaN-based converters operating at cryo-genic temperatures. A 1 kW, GaN-based, 3-level power converter, shown in Figure 25, was designed and tested from room temperature down to -140 °C using a custom-milled cold-plate. At 60 °C, a 16% reduction in losses was achieved at rated power. An estimated power-loss 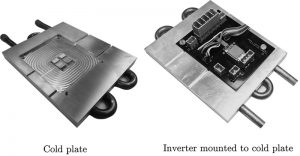 breakdown was performed by taking into account the decreasing conduction losses of the GaN FETs and preliminary estimates of losses for the passive components. It is clear there is opportunity to gain additional efficiency by combining high-performing GaN FETs with passive components optimized for low-temperature operation. This research is supported by NASA.