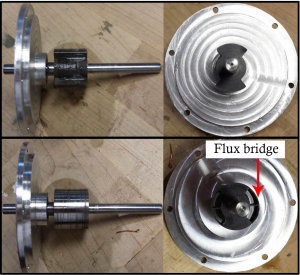 The switched reluctance machine (SRM) is robust and a candidate for ultra high speed (UHS) applications. UHS motor drives have interesting features such as small size, high power density, and high efficiency, and they are attractive for applications, including micro-turbines, vacuum pumps, PCB drills, dental drills, spindle drives, and flywheel energy storage system drives. The SRM has a robust structure, due to the lack of magnets on the rotor, as compared to the PM machine. To obtain the benefits of a smooth cylindrical outer surface for the rotor, a novel SRM rotor design with a flux bridge is proposed and fabricated (Fig. 11). The flux bridge, made of the same material as the rotor, is thin enough to be mechanically strong enough but saturates magnetically, thus behaving as air for the flux.

An SRM with the flux-bridge rotor has been designed and tested at 20 krpm (Fig. 12 left) and 50 krpm (Fig. 12 right). The upper two traces are the current, and the lower two traces are the voltage waveforms per phase. The closed-loop speed and current control has been implemented, with an encoder mounted on the shaft to provide the rotor position information. A detailed comparison between the two rotors (with and without a flux bridge) is planned.

Figure 12: Experimental current and voltage waveforms for the SRM with the enhanced rotor at 20 krpm (left) and 50 krpm (right)

This research has been supported by the Grainger Center for Electric Machinery and Electromechanics.