Frequency regulation is utilized in a power system to track the moment-to-moment load ﬂuctuations in near real-time, and ensure generation and load are balanced in each control area. An alternative to the conventional regulation generators, the distributed energy resources (DERs) can also aggregately provide such services to the bulk grid as shown in Figure 30. In this research, we address the problem of optimally dispatching a set of DERs in a lossy power network to provide frequency regulation to the bulk grid to which the power network is connected. The dispatch objective is to minimize the total incremental network losses, which are approximated by a linear function of the regulation power provided by each DER, while the DERs collectively provide the requested amount of active power at the interconnection bus. 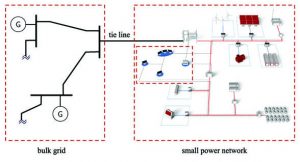 The problem is solved in two steps. First, the coefficients of the incremental loss function – the loss factors (LFs), which are essentially the sensitivities of the total network losses to the active power injections – are estimated distributedly using a measurement based approach. After obtaining the LFs, the optimal DER coordination problem is solved using a linear iteratively distributed algorithm, the so-called ratio consensus algorithm, which requires only local information acquired through information exchange with neighboring DERs. The proposed decentralized control algorithm is computationally efficient, easy to implement, robust, and was experimentally validated in a wireless testbed. This research is supported by This research is supported by the Advanced Research Projects Agency (ARPA-E).