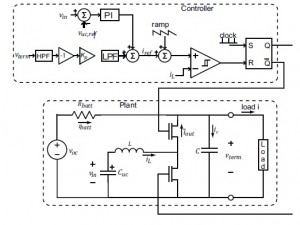 This work investigates controlling a dc-dc converter connecting a capacitor or ultracapacitor (UC) to a dc voltage bus by regulating the converter series impedance. Decoupling the capacitance from the voltage bus is shown to reduce the size and/or weight of the power source. The dc-dc converter impedance is shaped by a high-pass filter so that it is low at high frequencies but infinite at dc. This shaped-impedance controller allows load current to be shared between the dc source and decoupled capacitor, even when the dc source is uncontrolled, as long as the dc source has nonzero source impedance. Charge transfer to and from the capacitor is limited to a finite value proportional to a step change in bus voltage. 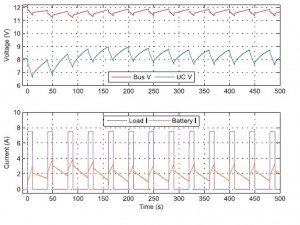 The same control approach was applied to the converter. Decoupled capacitance was added to an electric vehicle power source, where the dc source is a battery connected directly to the output voltage bus, and to a voltage regulator module (VRM) for a desktop computer processor. Figure 12 shows the combined source for the vehicle (Plant) and its controller. The shaped-impedance controller includes the blocks from vterm to iref. A second PI loop from UC voltage vin to iref. helps regulate UC charge level. Figure 13 shows experimental results of the system in Figure 12 at scaled-down voltage and current levels. The system is effective at smoothing the current drawn from the battery while keeping the UC voltage within its operating limits. For the VRM, a multiphase buck converter is augmented by a second set of phases which carry only fast current transients. Large-signal models and switch dissipation analyses predict that the proposed topology eliminates the need for bulk electrolytic capacitors on the voltage bus and maintains efficiency comparable to a conventional multiphase VRM.
This research was supported by the Grainger Center for Electric machinery and Electromechanics