Eﬀective operation of microgrids requires a control architecture that implements multiple (and sometimes conﬂicting) control functions: (1) Frequency control, (2) Voltage control, (3) Optimal asset dispatch, (4) Provision of ancillary services, (5) Optimal power ﬂow, and (6) Synchronization. In my previous work, we have reported on the development and implementation of each of the above control functions in a centralized as well as in a distributed fashion. In addition, we also reported on the important problem of integrating the various diﬀerent microgrid control functions under the centralized architectural solution. To that end, we previously presented a systematic approach towards building a centralized scheduler for integration and operation of the diﬀerent microgrid control functions ensuring smooth microgrid operations and transitions during diﬀerent control objectives. We now provide a few preliminary results obtained as part of the controller hardware-in-the-loop (C-HIL) testing of the centralized scheduler as it drives a microgrid network through three operational objectives. For the testing purposes, we make use of the National Instruments’ (NI’s) Compact RIO (cRIO) 9068 (see Fig. 1) to implement and test the scheduler for coordinating the control functions.  For the test system, we make use of a realistic power distribution network operated as a microgrid known as the Banshee microgrid system which was modeled on four Typhoon HIL real time emulators. 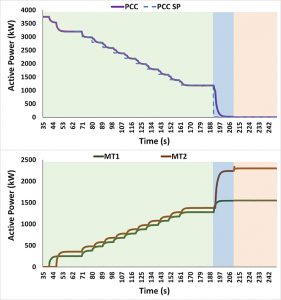