The expansion of electric transportation, and electric or hybrid flight in particular, has accentuated the need for high specific power density (power to weight ratio) electric drive systems. Many high power density electric machines have reduced back iron and high fundamental frequency. This is a challenge for drive development, because there is less filtering inductance in the motor, and the inverter must generate a sinusoidal current. Multilevel inverters are one approach to solve this problem. This research presents the implementation of a modular motor drive comprised of flying capacitor multilevel (FCML) inverters. Although the topology has been in existence for some time, implementation challenges have hindered its development. As a result, this will be the first demonstration of an FCML-based motor drive with more than three levels Figure 1. 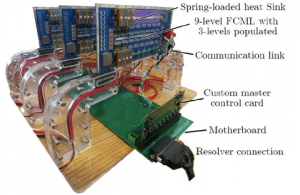 Modular inverter structures offer a potential range of benefits—they improve system reliability, scale system power ratings, and enable motor/drive integration. In this work, a hierarchical control structure allows for a scalable design that is adjustable to meet multiple applications. Vector motor control is accomplished using a hierarchical control strategy implemented using multiple levels of FPGAs. Figure 2 shows the control structure used to ensure current sharing between the interleaved inverters in each module and the inverter current before and after compensation. This research is supported by NASA.