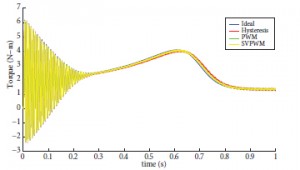 A modular inverter designed by Professor Krein’s graduate students a few years ago provided the design for two more modular inverters built recently. One is being used to implement induction motor control via direct torque control (DTC), indirect field-oriented control (IFOC), vectorized volts-per-hertz control, and feedback linearization. These controls will be applied to determine which application they best fit: electric and hybrid-electric vehicles, industrial 3-phase motors for lathes and milling, and consumer appliances such as washing machines, air conditioners and compressors. In the same system an encoder with 11-bit resolution was attached to a dynamometer running as a speed feedback device. 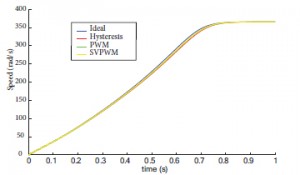 As of July 2009, DTC, IFOC, vectorized volts-per-hertz, and feedback linearization have been simulated and are operational in Matlab-Simulink. Also, different switching techniques such as bang-bang (hysteresis), pulse-width modulation (PWM), and space-vector pulse-width modulation (SVPWM) have been applied to vectorized volts per hertz to see which one has superior performance. The average switching frequency was kept the same, in this case 10 kHz, a typical switching frequency in power applications.