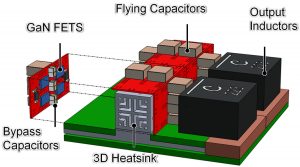 Wide-bandgap semiconductor devices such as gallium nitride (GaN) and silicon carbide (SiC) have found use in power electronics as high-performance switches, allowing for higher frequency switching with minimal losses; this in turn reduces the required physical size of many of the passive components required in such designs, mainly the capacitors and inductors employed in switched-mode power supplies. The flying-capacitor multilevel (FCML) topology, which leverages the high energy density of capacitors, can be used in conjunction with wide-bandgap semiconductors to further push volumetric (power-per-unit volume) and gravimetric (power per unit weight) power densities to extreme levels. However, increasing the power density of a converter also increases the power loss density, making thermal management of 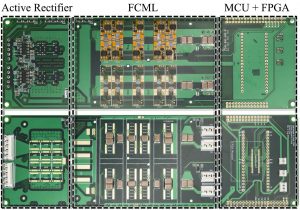 Figure 17: Electrical prototype of a 6.6kW bidirectional converter between 400 VDC and 240 VAC

such a system difficult. Furthermore, current methods of electrical, thermal, and mechanical co-design are difficult and highly iterative. This work proposes a methodology and prototype for such a process of co-design; a 3D folded converter prototype (Figure 16) is designed to reduce heatsink volume and improve heatsinking efficiency while keeping electrical efficiency high. Figure 17 shows an electrical prototype of a 6.6 kW bidirectional converter between 400 VDC and 240 VAC. Such a system can be applied in solar inverter systems, electric vehicle charging systems, or in more-electric aircraft. Further prototypes aim to push the overall system power density above 25 kW/L. This research is supported by the Center for the Power Optimization of Electro-Thermal Systems (POETS).