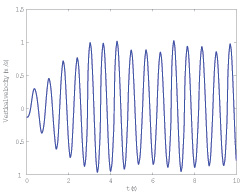 Figure 35 Vertical velocity of the motor case and slider in the up-down motion generator.

Based on previous work on biomechanical energy conversion, we have identified two motions—horizontal foot movement and up-down center-of-gravity movement—as energy sources and a linear moving-coil magnetic-generator model for power conversion. Testing of the second-stage prototype devices has shown significant power output from both motions. Further work was also done on optimization of the energy conversion system. Magnetic equivalent circuits were developed. Based on the MEC, a dynamic model of the linear motor was derived. Dynamic simulations were performed to find maximum power output based on geometric parameters. Figure 35 shows the vertical velocity of the motor slider in the up-down motion generator from simulation. A motor was designed and built. Test data will be available soon. 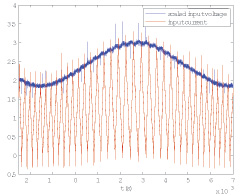 An actively controlled ac-dc power electronics interface was designed for maximum power extraction from the generator to a battery load. The converter was controlled with a current-tracking strategy to fulfill the impedance-matching function. Critical conduction-mode control was used in the control strategy. A low-power control circuit was built and tested in the lab. Figure 36 shows the measured input current and scaled input voltage waveforms. The current is tracking the scaled voltage.