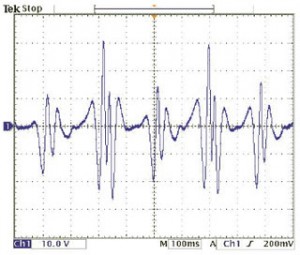 This year, we have been working on three potential human motions for energy harvesting and design of one energy-harvesting device for each motion. Arm swing, horizontal foot movement, and up-down center-of-gravity movement during walking are analyzed for energy harvesting. Given commonality among the three motions, a general linear moving-coil magnetic generator model is proposed. Based on a linear-motor finite-element model, prototype devices have been designed and built for each motion to match its biomechanical characteristics. After testing the prototype devices, second-stage devices have been built for better mechanical and electrical performance.

A high-efficiency, self-powered voltage doubler and a voltage tripler with a synchronous rectifier have been built and compared for the charging of the battery from the generator. With the betterperforming voltage doubler, a maximum of 100-mW power fed into the battery has been claimed, and 300 mW has been recorded into the matching resistor load. Figure 46 shows a typical open-circuit voltage waveform from foot-swing motion. To further optimize the system, magnetic field analysis of the linear motor topology has been performed with a magnetic equivalent circuit method and a 2D analytical method; the results show agreement with finite element analysis (FEA) code. Our analysis results of coil field flux density from the Biot-savart law is compared with the FEA code and Maxwell method in Figure 47. In future work, human motion models will be built as the input to the linear motor models. With motion models and motor models, linear motors will be optimized according to space restrictions. 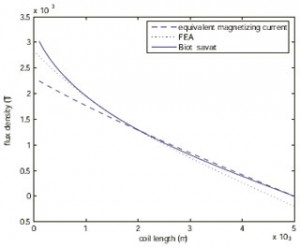