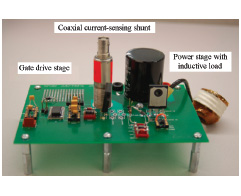 Protection of insulated gate bipolar transistors (IGBTs, which are used in high-voltage inverters for automotive and industrial motor-drive applications) from overcurrent and short-circuit current during operation is essential to ensure system reliability. Faults in electric machine drives result in the IGBTs carrying a current substantially higher than rated (often tens of times during short-circuit current). This may result in device rupture from any of the following:

This project analyzes overcurrent and short-circuit behavior of 600 V/30 A IGBTs made by International Rectifier® and Infineon Technologies®. A behavioral comparison is carried out between the devices during hard and soft shut-down following overcurrent detection.

The protection scheme, where the collector-emitter voltage is monitored, is known as “desaturation detection.” Sudden unexpected high currents force the voltage across the device to rise when it is supposed to be low during on-state. The rise is detected and, consequently, the protection circuitry is initiated, bringing down the gate voltage to reduce the collector-emitter current, and in some cases, shutting down the device altogether. Shut-down can be regular (hard) or soft, where the timing is controlled by external capacitors and Zener diodes. Again, depending on the application, soft shut-down may not be necessary. The response of different IGBT structures to hard and soft turn-off will also be analyzed.

Hardware has been setup as shown in Figure 20. The power stage consists of a half-bridge configuration where the upper IGBT is shorted to behave as a free-wheeling diode and the lower is under test. A sample test result is shown in Figure 21 with the soft turn-off initiated and the IGBT shut-off even before the logic-level gate signal turns off.