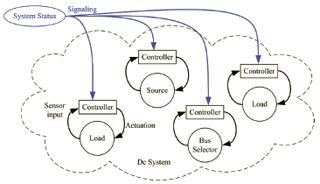 Figure 29: Low-bandwidth signaling adjusts the operation of each autonomous local controller based on desired system-level performance.

Direct-current power systems have long been the standard for power distribution in many applications where reliability is the primary concern such as telecommunication and space systems. In Navy ships, where reliability is also of utmost importance, interest in integrating and managing total system energy resources has led to new applications. Also, the proliferation of low-voltage/low-power dc loads makes it likely that dc will be used in future commercial and residential buildings. This paradigm change from ac to dc distribution facilitates the ability to closely monitor and control individual loads to improve overall system reliability. In a power-constrained environment such as a blackout in a building or missile strike to a ship, the load can be utilized as an energy asset – also a paradigm change since the load is now considered a control actuator instead of a disturbance. 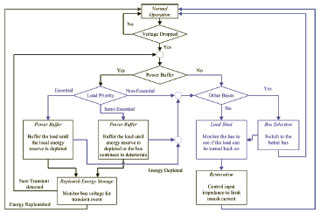 The focus of this research was on distributed control techniques, shown in Figure 29, that act locally but in an orchestrated manner to ensure reliable system operation without relying on a central controller or communication network. Information contained in the bus voltage level and rate of change, sensed at each point of load (POL) converter, is the primary control input and provides knowledge about the state of health of the entire bus. System-level signaling modifies the behavior of the local controls to achieve the desired system response. For example, the bus voltage drops if the load increases, sources are lost, or additional system damping is used to prevent instability. The behavior of the loads is modified according to the algorithm in Figure 30 to ensure that the highest priority loads remain energized. To test these algorithms, POL converters and controls were designed and built to create the demonstration distributed dc system shown in Figure 31. 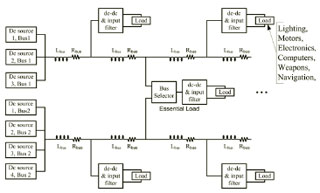