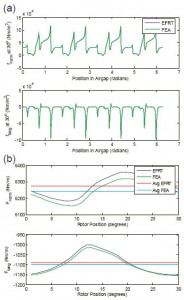 Designers of permanent magnet synchronous machine (PMSM) drive systems face the challenge of selecting a machine geometry and stator excitation that must meet a number of competing requirements for torque density, torque ripple, cost, mass, etc. Tools that are used to create PMSM designs are often based on an MEC model of the machine. Alternatively, analytical derivations are used to determine the magnetic fields in the airgap from which machine parameters and electromagnetic torque can be predicted. Both models are 15 relatively efficient and can be coupled to models of power electronics to investigate the performance of an entire drive system. However, the assumptions upon which the models are based, mostly related to the behavior of the magnetic fields around stator slots, limit a designer’s ability to explore a comprehensive design space.

Although potentially more accurate than MEC or analytically-derived fields models, the computational effort required to solve for the fields within a machine using numerical approaches such as finite element (FE) is often substantial. Therefore, FE techniques have been used predominantly for analysis, rather than as the engine of a design optimization vehicle. A goal in this research has been to reduce the computational effort required to obtain fields-based models of electric machines. Specifically, an extended field recon-struction technique (EFRT) has been derived that uses the results of 4 static FE simulations to establish the fields within the airgap of a machine under arbitrary excitation, rotor position, and rotor speed. As shown in Figure 5(a) and (b), force densities and overall force (radial and tangential) obtained using the EFRT are comparable to that of a full FE model. Yet the EFRT matches the efficiency of MEC or analytically-derived models. As part of ongoing research, the EFRT-based models are being coupled to behavioral models of semiconductor devices to explore system-level trade-offs in machine design.