We propose a generation control strategy for lossless microgrids with inverter-interfaced generators. In particular, we address the problem of obtaining a desired active-power load sharing while regulating the frequency to some nominal value. The proposed control strategy is based on the slow readjustment of the active power reference of each inverter, i.e., each inverter aims to track a slowly-varying reference that is set sufficiently close to the actual active power injection and, thus, is easy to track. The control enforces the phase trajectory to satisfy the so-called “phase cohesiveness property,” which is essential for achieving the desired active power load sharing, while ensuring the system remains stable at all times. Even when large load perturbations initially set the actual active power injections far from the desired references, we proved that the proposed controller always achieves tracking if the initial injections and the references strictly satisfy the phase synchronization condition. We found an upper bound for the time of convergence to this reference within a small error bound.

Consider a 9-bus microgrid, the topology of which is shown in Fig. 1. Nodes 1, 2, and 3 correspond to inverters, with the remaining nodes corresponding to loads. Figure 2 shows the performance of the proposed control strategy for large load perturbations which initially set the actual active power electrical injections into the network far from the desired references. By executing the proposed controller, we are able to achieve active power load sharing and regulate the frequency to the desired frequency value of 60 Hz. This work is funded by the National Science Foundation under grant ECCS-CPS-1135598. 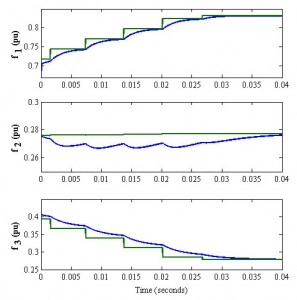 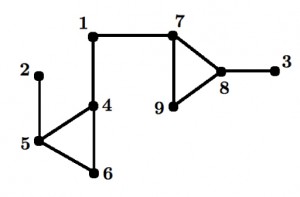 Figure 1: Example of a microgrid with 3 inverters and 6 loads