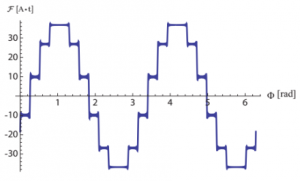 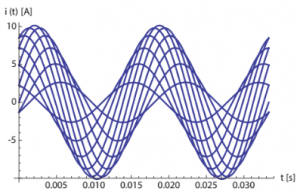 Figure 1: (b) Coil currents for a tooth-wound 12-phase machine operated to match perfromance of a four-pole, three-phase machine

Electric machine configurations that fully leverage the flexibility available from power electronics-based sources are explored. Initially, the focus is operational advantages gained by using an increased number of inverters to excite a caged induction machine. The effect of stator coil configurations, associated interconnections made to the power electronic switches, and resulting voltage and current waveforms are investigated through steady-state and dynamic models.
Increasing the number of independent machine excitations provides increased operational flexibility. Figure 1(a) shows the air-gap magnetomotive force (MMF) waveform for a conventional concentric-wound, four-pole, 24-slot machine fed with a balanced three-phase excitation. If, however, the machine were to be rewound with 24 tooth-wound coils with 12 independent single-phase inverters, the exact MMF waveform in Fig. 1(a) could be formed if the currents of Fig. 1(b) were developed. In addition to this example, the use of multiple independent machine excitations can be used to enable electronically controlled pole-changing, active damping, and improved fault-tolerant operation.