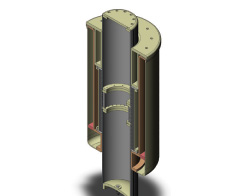 Grainger CEME funding has contributed to the research and development of a permanent magnet synchronous tubular linear generator (PMSTLG), as shown in Figure 6. The purpose of this PMSTLG is to directly convert the linear motion of ocean waves into electrical energy, via a point-absorber buoy, by means of a linear tubular generator which is incorporated between the spar and float of the buoy. The design focus was to develop a 1-kW system with high efficiency and low cogging forces while operating in an ocean environment with a salt water gap at relatively slow speeds. The operating speeds are less then 1 m/s with a design nominal operating velocity of 0.76 m/s. The nominal rating of the PMSLTG is 1 kW, with a peak of 10 kW.

The gap contains bearing surfaces for the linear motion and provides a water-tight seal. In order to achieve this, the magnetic circuit of the machine was optimized with a relatively large air gap and the eddy current losses were minimized with laminations. Since this machine is being integrated into a buoy, the machine weight and size are also optimized for buoy energy extraction performance. New techniques for limiting the cogging forces in linear machines have been developed and incorporated into the PMSTLG. The machine construction has also been considered to minimize construction costs and future scaling of machine ratings.

The generator is being built, as is the buoy structure and fabrication. Integration of the generator and buoy will take place in August 2007, along with preliminary testing, before ocean deployment in late September, 2007.