This research project presents an additively manufactured heat exchanger for rapid prototyping and active cooling of an electric machine. A rectangular in-slot heat exchanger with a coolant is used to cool the winding. The heat exchanger is optimized for a high heat transfer coefficient, high-temperature operation, water tightness, and additive manufacturing capability. Two different 3D printing materials have been considered for the heat exchanger, which can withstand a maximum temperature of 110°C and 200°C, respectively. The winding thickness is calculated using these maximum temperature limits for the desired slot current density. A copper thickness of 1.3 mm corresponds to a peak slot current density of 27 Arms/mm2 for a heat transfer coefficient of 3000 W/m2K. This winding is realized by a flat wire on each side of the heat exchanger, shown in Fig. 1a and b. A preliminary mock-up unit is shown in Fig. 2  with the flat wire, a dummy heat exchanger, and black cubes that hold the assembly in place temporarily. This coil is designed to use a single-layer concentrated winding for a 12-slot 10-pole 5kW SPM.

Another winding alternative is presented using printed circuit boards (PCB). The heat exchanger remains the same, but a PCB is used as the winding rather than a flat wire, as shown in Fig.1 c and d. PCBs make the fabrication easy but reduce the slot current density to around 13 Arms/mm2, which requires double the slot area for the same machine. The hotspot temperature for the flat wire winding is kept around 180°C, and for the PCB winding around 110°C, which is the limit for materials used. If PCBs are mass-produced and placed automatically, it can be a lower-cost option than flat winding. The concept will be published and presented at the IEEE ITEC conference, and another conference paper is under review.

Figure 7.a. Flat -wire with HX and stator core 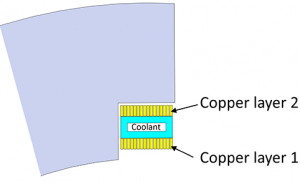 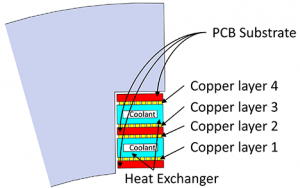 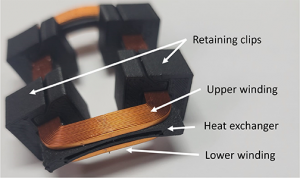 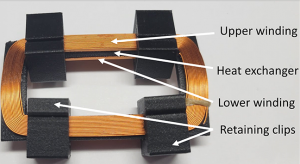