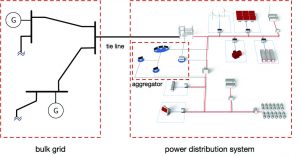 Frequency regulation is utilized in a power system to track the moment-to-moment load ﬂuctuations in near real-time and ensure generation and load are balanced in each control area. Alternative to conventional regulation generators, distributed energy resources (DERs) can also aggregately provide such services to the bulk grid as shown in Figure 32. In this research, we address the problem of optimally coordinating a set of DERs in a lossy power distribution system such that the DERs collectively provide the requested amount of active power at the tie line with minimum total incremental system losses. To this end, we developed an adaptive coordination framework that consists of two components (shown in Figure 33), of which the first is an estimator for the loss factors (LFs) – the sensitivities of the total system losses with respective to nodal power injections – that are used to approximate the incremental losses, and the second is a solver for the optimal DER coordination problem (ODCP) that determines the optimal regulation power – incremental change in active power with respect to some nominal value – provided by each DER. The estimated LFs will be updated dynamically so as to adapt to various phenomena that impact the operation of the power system, e.g., changes in the system operating point. Numerical simulation has shown that the proposed adaptive coordination framework can achieve very good estimation accuracy and regulation performance. This research is supported by the Advanced Research Projects Agency (ARPA-E). 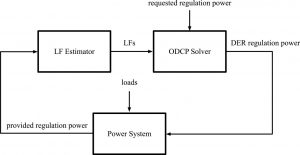