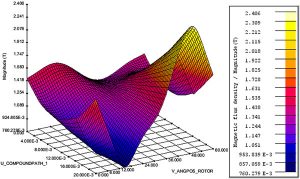 exhibit zero loss when in dc conditions, though ac current produces considerable loss due to hysteresis, eddy currents, and coupling. For this reason, many present designs for such machines are partially superconducting, meaning that the dc field components are superconducting while the ac armature coils are normal copper conductors. A fully superconducting machine would consist of both superconducting field and armature components, though this would introduce the previously mentioned ac losses. Typically, these losses are affected by frequency, peak field magnitude, peak current magnitude, and phase shift, and can be calculated on a per-wire basis to determine total loss. Figure 4 shows an example distribution of magnetic flux density on an armature section over a single electric cycle, which must be integrated to determine total loss. 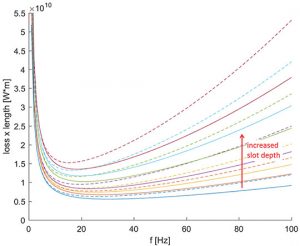 Figure 5: Superconductor loss and length as a function of frequency and slot depth for 6-pole (solid) and 8-pole (dashed) designs

This research aims to characterize expected losses in the components of fully superconducting machines based on partially superconducting designs described in prior work. Various factors are examined, such as motor geometry, operating frequency, and operating temperature, and an optimal design is proposed for wind generation based on the loss calculations. A sample comparison between 6- and 8-pole designs is shown in Figure 5, with the loss and superconductor length plotted as a function of frequency and armature slot depth. This research was supported by NASA and the Grainger Center for Electric Machinery and Electromechanics.