Ata Zadehgol with advisor A. Cangellaris

A semi-analytical model for calculating electromagnetic fields inside an infinitely-long solenoid of rectangular cross section and core formed by a planar multi-layered laminate is developed. The laminate is formed by alternating dielectric and magnetic sheets. Use of laminated cores offers the advantage of reduced skin effect loss and sustained high inductance value compared to single-layer magnetic cores. The semi-analytical model is based on a rigorous mathematical approach that uses the principle of superposition to cast the original non-separable electromagnetic boundary value problem in terms of two separable problems: one amenable to an analytical solution using separation of variables and the other suitable for a physics-driven approximation in terms of an auxiliary problem which lends itself to a solution through separation of variables. The model may be used to obtain per-unit-length inductance and resistance values versus frequency for the solenoid. It is useful for devising guidelines for the design of in-package planar, laminated-core inductors. These inductors provide for miniaturization of voltage regulator modules in package, leading to improved power delivery and signal integrity of high-speed I/O’s, and increasing the switching rate potential of multi-GHz ICs. 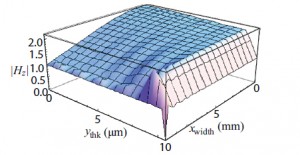 Figure 38: Magnetic field intensisty inside one quadrant at a frequency of 100 MHz

Figure 37 depicts the cross-sectional geometry of the laminated core. The cross-sectional dimensions of the core are w = 20 mm and t = 20 μm. Figure 38 shows the magnitude of the calculated magnetic field intensity inside one quadrant of the core at a frequency of 100 MHz. Clearly, a very uniform distribution is observed, indicating that the entire volume of the solenoid contributes to the inductance. For the specific magnetic material used, the skin depth at 100 MHz is 14.53 μm. Thus, if a solid core of the same magnetic material were used, only a small portion of the volume of the solenoid would be occupied by the field, resulting in a significant reduction of the inductance.