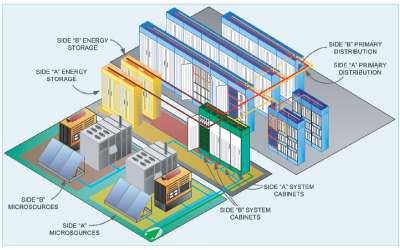 A microgrid is an independently controlled portion of an electrical grid. It comprises its own power sources, energy storage devices, and loads. A microgrid can achieve improved local reliability and high efficiency relative to the complete power grid. It also provides uninterruptible power supply functions. These characteristics make a microgrid-based power system especially suitable for applications that require highly reliable power supply. In this application, ultra-high availability is achieved by eliminating the single point of failure in the power supply that is present in traditional configurations. Enhanced reliability is also achieved in emergency situations such as operation during and after natural disasters. 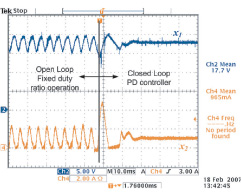 Figure 30 Experimental stabilization of a buck converter with a constant-power load.

This work explores a microgrid-based telecom power plant with a modular distributed architecture as a basis for other applications. The analysis is performed at two levels: a system-level design, and a component or subsystem level. At a system level, the study determines the most suitable configuration of a microgrid-based telecom power system and establishes a basis for optimal design by comparing alternative configurations using a value function that considers the power plant’s main characteristics. At a component level, the study focus on several issues derived from the system design. Some of these issues are reliability, power electronics interface topologies, and control and stabilization of constant-power loads. This work proposes the use of multiple-input dc-dc converters that combine buck-boost and boost inputs. The multiple-input converter provides a way to achieve full redundancy in the power path (Figure 29) and increases the power system availability by two orders of magnitude. The analysis uses passivity based control techniques to stabilize the three basic dc-dc converter topologies—buck (Figure 30), boost, and buck-boost—subject to a constant-power load. The controller derivation strategy yields a simple linear PD controller from a global nonlinear analysis. The analysis is supported by simulations and experiments.