Cryogenic hydrogen-energy electric transport aircraft (CHEETA) is a concept proposed to utilize the high specific energy content of liquid hydrogen (LH2) through fuel-cell energy conversion and an ultra-efficient distributed electric propulsion system. The concept uses LH2 not only as the energy storage mechanism, but also as a cryogen to enable a highly efficient superconducting (SC) electric system. This enables the usage of SC machines with SC power cables to efficiently convert electrical energy into mechanical energy. Letting gaseous hydrogen used in the fuel cells evaporate by heat losses in the SC motor and cables, the system provides free cryogenic cooling for SC electrical components. An ultra-efficient electrical system could be obtained using this concept, if the required cryogenic power to remove generated heat losses in the electrical system is maintained below the accessible free cooling. Table 1 gives available total power and estimated cooling capacity for a six-hour regional flight. 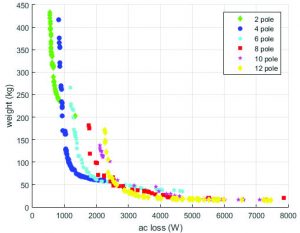 In this study funded by NASA, a fully SC machine is designed for electric propulsion for the electric aircraft considered. To increase power density, an inside-out synchronous machine is proposed where traditional passive shielding is replaced with active SC shield coils. The additional coils are placed radially outward to contain the flux within the machine. Even though fully superconducting machines look attractive for this application, they have significant practical challenges introduced by the SC armature coils. When alternating fields and currents are introduced to SC materials, they generate losses, known as ac losses, in the form of heat. These losses are cyclical and increase with both applied frequency and peak applied flux density squared. Because motors for electric propulsion operate at high speeds and therefore experience high electrical frequencies, losses in the armature coils are significant and determine design feasibility. 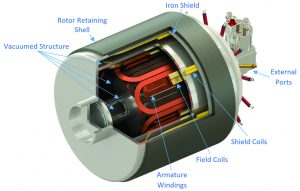 A detailed optimization study was carried out to understand the trade-off between ac losses and weight. Figure 7 presents the optimal front obtained from the pole-count study showing weight and loss trade-offs. Results indicate that a machine design with power density greater than 25kg/kW could be achieved with an allowable cooling budget of 5kW. A preliminary mechanical design of the optimal motor is given in Figure 8.