Sebastian Smater with adviser A. Domínguez-García 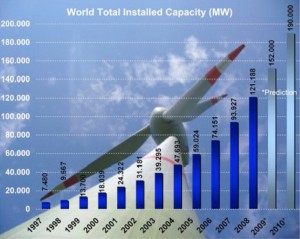 Power generation from renewable resources has seen a rapid development (thanks mainly to political and social support) during the last decade, as a result of high fossil fuel prices and greenhouse effects (see Figure 31). Reports such as “20% Wind Energy by 2030” by the U.S. Department of Energy states that achieving 20% of wind power penetration in the U.S. by 2030 can be done reliably and economically (with an energy cost of less than 0.5 c/kWh). However, achieving that goal will require (i) enhancement of the transmission infrastructure, (ii) improvement of reliability and operability of wind systems, and (iii) increased U.S. manufacturing capacity of wind generation equipment. This research is concentrated on improvement of reliability and operability of wind energy conversion systems (WECS).

Development of a framework to assess the impact of faults on WECS performance is essential to maintain a high level of system reliability with economically reasonable costs of overall generation. The main issues to be captured by the proposed framework are the concurrent effects of wind speed variability, grid operating conditions and WECS internal and grid faults on system reliability. 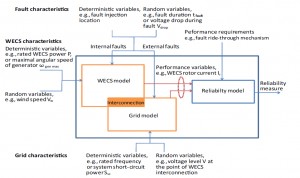 A measure of reliability for a particular WECS design must also be quantified under all possible operating scenarios and all possible types of internal and grid faults. As shown in Figure 32, WECS and grid characteristics are inputs. Most inputs are deterministic, but some are modeled as random variables. Examples of the latter are wind speed and the reactive power-generation set value. The concurrent effect of the variability of these random inputs with different types of faults, such as voltage drop level and fault duration, which are also considered as random events, is taken into account in computing the WECS reliability measure. Inputs modeled as random variables are described by their corresponding probability distribution functions. WECS critical parameters that affect fault ride-through capabilities can also be identified.

The doubly fed induction generator (DFIG) dynamic model (shown in Figure 32) is being used as a case study to illustrate the application of this framework. The DFIG, which now accounts for more than 45% of the installed WECS, consists of seven main submodels: (i) mechanical torque, (ii) two-mass turbine, (iii) fifth-order induction generator models, (iv) rotor-side converter control, (v) pitch control, (vi) dc-link model, and (vii) grid-side converter control. Grid models that can be implanted to assess a particular WECS reliability can range from simplified infinite-bus models, up to detailed large-scale grid models. A WECS test example of critical parameters that affect fault ride-through found a reliability index equal to 0.8685. If the rotor inductance and resistance are increased by 30%, the new reliability index equals 0.8852, which suggests that by increasing rotor inductance and resistance, resilience of the WECS against faults on the grid is increased. On the other hand, it could also lead to higher power losses in the steady state.

This work is supported by General Electric Energy Infrastructure.