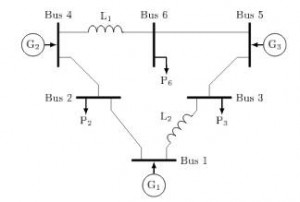 This research develops and implements a control architecture for small-footprint power systems which replicates the functionality of the centralized control utilized in bulk power systems, i.e., frequency regulation and optimal dispatch, in a distributed fashion. We assume that each generator is equipped with a local controller and a wireless transceiver through which information can be exchanged with neighboring generators. Relying on this communication network and simple computations executed by local controllers, we utilize distributed, iterative algorithms that allow the generators to determine their output commands in order to regulate system frequency and minimize total operational costs, while accounting for output constraints. The distributed control architecture, unlike centralized counterparts used in bulk power systems, is event-triggered, i.e., generator commands can be updated at non-fixed time instants. This allows a faster return to operation at nominal frequency.

A 6-bus small-footprint power system illustrated in Fig. 24 is implemented in the lab using three synchronous generators rated at 2-hp and 230 Vll. An Arduino microcontroller outfitted with an XBee wireless transceiver, which acts as the local controller, is connected to each generator prime mover. 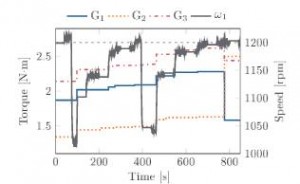 After a load change, one of the local generator controllers measures the frequency error and determines how much torque should be added or removed from the system in order to return to the desired frequency. The local controllers then begin executing the distributed algorithm, which serves to disperse the torque error among all of the system generators. After the frequency error has been reduced to a specified bound, the generators are dispatched so as to minimize overall cost. Figure 25 illustrates the torque supplied by each of the three system generators as well as the generator mechanical speed following a load increase. The control architecture effectively returns the frequency to the desired value of roughly 1200 RPM (the equivalent of 60 Hz) and subsequently adjusts generator output, effectively minimizing overall costs.

This work is funded by the National Science Foundation (NSF) under grant ECCS-CPS-1135598.