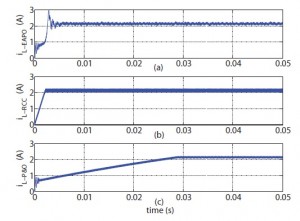 This project develops an algorithm to optimize real-time problems where ripple correlation control (RCC) cannot be utilized because the given applications have no inherent ripple. Real-time optimization tracks the cost function optimum in a dynamic system. Known techniques for real-time optimization are perturb and observe (P&O) algorithms, adaptive P&O (APO), and RCC.
The P&O technique is widely used due to its simple structure and implementation. It perturbs the system and then adjusts operation to improve the cost function where the control variable varies with time. At each step, the change in the control variable is uniform. If the step size is very small, the steady-state oscillations will also be very small, albeit with an extremely long convergence time. Several APO techniques have been introduced that adjust the perturbation step size to improve tracking speed and reduce steady-state oscillations. 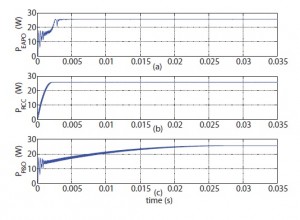 The exponential adaptive perturb and observe (EAPO) method proposed adapts the step size exponentially in order to accelerate convergence towards the optimum with minimum steady-state oscillations. This approach offers substantial benefits for typical optimization problems in power converters. The system is implemented on a power converter for a maximum power transfer and compared with RCC and P&O algorithms. The results are shown in Figures 4 and 5. The steady-state errors in the RCC, EAPO and P&O control variables are 1.03%, 3.56% and 7.17%, respectively. RCC and EAPO take 3 ms and 5.5 ms, respectively, to converge to the optimum point, whereas the P&O algorithm converges in 27.08 ms. EAPO is shown to perform better than conventional P&O and can be a substitute for RCC in applications that have no inherent ripple.