The Solar Decathlon (Figure 17) consists of twenty teams of students, coming from national and international colleges and universities, competing to construct the most aesthetically appealing and energy-efficient home whose sole source of energy is solar. The team for the University of Illinois at Urbana-Champaign consists of our group in the Electrical and Computer Engineering department—Trishan Esram and undergraduate Ehsan Safavinejad—and other undergraduates and groups from various departments. The Solar Decathlon began in the spring of 2006 and ends October 2007. 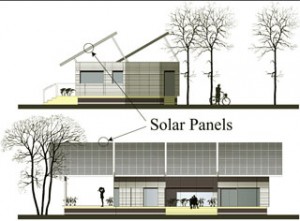 The focus of our group is to maximize and efficiently distribute the power coming from the solar panels (see Figure 18), the only power source for the home. Our tasks include determining the power requirement of the home, designing and building an effective power system, and trading off between costs and efficiency when choosing electrical devices and appliances. While trying to meet the goals of the competition, we also have to satisfy the requirements of the National Electrical Code.