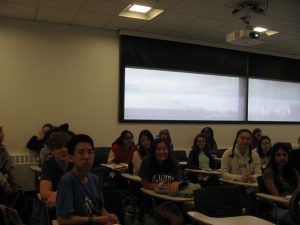 For the last three years, Professors Arijit Banerjee and Subhonmesh Bose (Bose) have given interactive presentations on power systems and power conversion to sophomore through senior high school girls during GLEE summer camps held at the U of I. GLEE, a week-long program which showcases ECE, was created by and is coordinated by Professor Lynford Goddard. Campers explore how their lives are affected by electrical engineering and how it addresses socially relevant issues.

Arijit and Bose teamed up to challenge the girls on ways power systems are used in a rock concert, in air 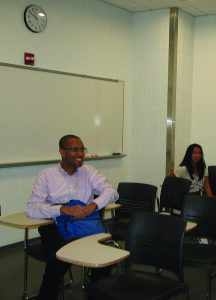 conditioning, for Instagram, the internet, and preparing breakfast. They then considered power sources and electromechanical energy conversion, e.g., using moving water to run a generator to provide electricity to send power to customers, or using energy from eating breakfast to pedal a bike hooked up to light bulbs to turn them on. The girls realized they could not consider living without electrical power and wondered how it could be made accessible to everyone in the world.

Bose talked about the history of electricity—Edison, Tesla, and the battle of the currents, and the need to step up and step down current to transmit it over long distances. He addressed reliability, which involves a delicate balance of demand and supply at all times, since we cannot keep an electricity inventory.
Arijit led the girls to experiment with magnets and magnetic fields to feel magnetic force and test different materials, including copper, aluminum, and plastic. He told them about the magnetic strip on credit cards. 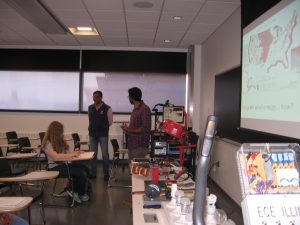 Bose described the U.S. grid’s three giant systems—Western, Eastern and Texas with its 160,000 miles of thigh voltage transmission—and a generation portfolio moving from coal and natural gas to renewables, including solar, wind, and hydro. The challenge is to economically move the generated renewable power, e.g., wind in Kansas, to high-demand locations.