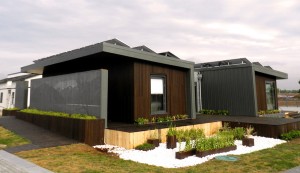 More than sixty Illinois students, including sixteen from ECE, collaborated for two years with a team from Peking University in Beijing to design and build Etho House, a showcase home for the first-ever Solar Decathlon China held in the city of Datong during the first two weeks of August. With 42 solar panels on the roof, power production exceeded the needs of the house, potentially allowing power to be sent back into the grid. The ECE-led team designed an automation system to control and monitor household utilities on an iPad. LED bulbs lighting the house operated with direct instead of alternating current and could be dimmed or colored by moving a slider on the touchscreen. Water-flow sensors tracked faucet-specific water consumption and displayed price points to indicate expenses associated with each water or energy-consuming unit, including the refrigerator. The system also monitored photovoltaic (PV) production, temperatures and humidity, and carbon dioxide levels.

Agriculture and Biological Engineering Professor Xinlei Wang, the team’s faculty advisor, noted that the modular house was very well received by the public. It was designed as a modern interpretation of the traditional homes found in and around Datong and Beijing, with a single roof surface sloping towards the back and a central courtyard. There were two bedrooms, one bathroom, and in the mixed-purpose living room, large triple-glazed windows looked out toward the back porch. The courtyard was enclosed with PV glass skylights that admitted natural light while simultaneously producing solar power. Sloping roofs were covered with PV panels, each with its own microinverter. This allows the system to adjust to partial shading of one or more of the panels so that maximum power can always be attained. Team members noted that the microinverters were able to perform under Datong’s harsh weather conditions, including heavy wind and rainfall. 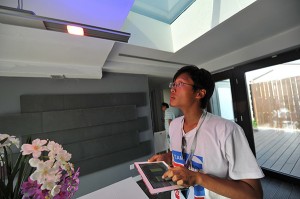 The competition, sponsored by the United States Department of Energy and China’s National Energy Administration, brought hundreds of students from thirty-five universities and thirteen countries. Juries of field-specific professionals evaluated the other nineteen homes on ten categories, including engineering, energy balance, and architecture. Because Peking University had organized the competition, the Illinois-Peking team had been asked to build a showcase home and was not officially judged in the competition. Financial support was provided by more than twenty industry and university sponsors, including the ECE department and the Grainger Center for Electric Machinery and Electromechanics.